We are here for you.

Senior Pastor
Pastor Heather Clawitter began her career in full-time ministry 2009, at the age of 34.  She graduated from Clarendon High School in 1993, Hendrix College in 1997, and pursued her seminary degree years later graduating from the Perkins School of Theology in 2009.  She married her high school sweetheart in 2010 (Dustin Clawitter), and the couple gained a son (Silas) by guardianship in 2018.  Dustin has worked in the commercial trucking industry for over 25 years, enjoys riding his Harley, and spending time with family.  Silas enjoys school, playing PS4 games, and hanging out with friends.  Pastor Heather loves being a wife, mother, and pastor.  She enjoys cooking, caring for her family, staying connected with old friends, riding the Harley with Dustin, and writing.  Her spiritual gifts include:  prayer, mercy, faith, giving, and hospitality. She has served churches in Bismarck, AR; Norphlet, AR; Mountain Home, AR; and Clarksville, AR. 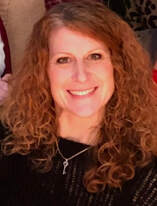 Director of Ministries
​Melissa Tripod began her work in ministry as a sophomore at Arkansas Tech University, in 1991, at the Wesley Foundation.  She began working with the Age to Age program, where she eventually became a Director and stayed for 20 years. Along with working with Age to Age, she spent time directing Circuit Riders and the A.C.T.S theatre group.  In 2011 Melissa accepted the Youth Ministry position at Russellville First United Church, staying seven years.  She became the Director of Ministries at Clarksville in 2019.  Melissa has always felt a call to ministry, and helping youth and children grow in their faith are her passion. She is married to Jon, a physical therapist, and together they have six children and two grandchildren. She resides in Russellville, and enjoys hanging out with her family, all things food, curling up with a good book and outdoor adventures.

Church Administrator
Rhonda Glisson is the church administrator and grew up in Columbus, Georgia and moved to Clarksville in 2010. She has spent 25 plus years working in church administration and loves her job and the people at Clarksville FUMC. She’s a beach girl at heart, but loves spending her Saturdays exploring the Ozark Mountains. She has two adult sons, and two grandchildren. She shares her home with Daisy--a rescued, 10 year old kitty cat.
​Sue Wollenberg is the Financial secretary and also the Director of the children handbell and chimes choirs.  She graduated from Bryant University in Rhode Island in 1983 and obtained her CPA licensure in 1986.  In 1996, she was "kidnapped" from Maine by her soon-to-be husband Eddie and brought to Clarksville, AR.  They have been married 24 years and have two children, Emily & Jonathan.

Pianist & Organist
Julia Frost has been playing the organ and piano in worship since she was in junior high school.  She was the organist at Clarksville First United Methodist Church from 1986-1991 and returned in 1994 to the position that she continues to hold.  She loves to sing and plays handbells with the Joyful Sound Handbell Choir.  Her husband is also active at CFUMC where they raised their three children.  Julia retired in July 2019 as the director of the Jones Learning Center at the University of the Ozarks, a position that she held for 25 years.

Handbell Director
Teresa Fine grew up in Fort Smith. She was saved in Vacation Bible School at age 11. Handbells became part of her life at age 15 and she has been directing handbell choirs of all ages for over 20 years. She is the wife of Bill Fine and the mom of three thirty-something children and four grandchildren.  Precept International taught her how to study the Bible inductively and she is a certified Precept instructor. Her masters degree is in education. Today the Lord has called her heart to directing and teaching handbells, Awana, pro-life issues, homeschooling, and teaching Bible to teenagers.
Joe and Kari Hall - custodians